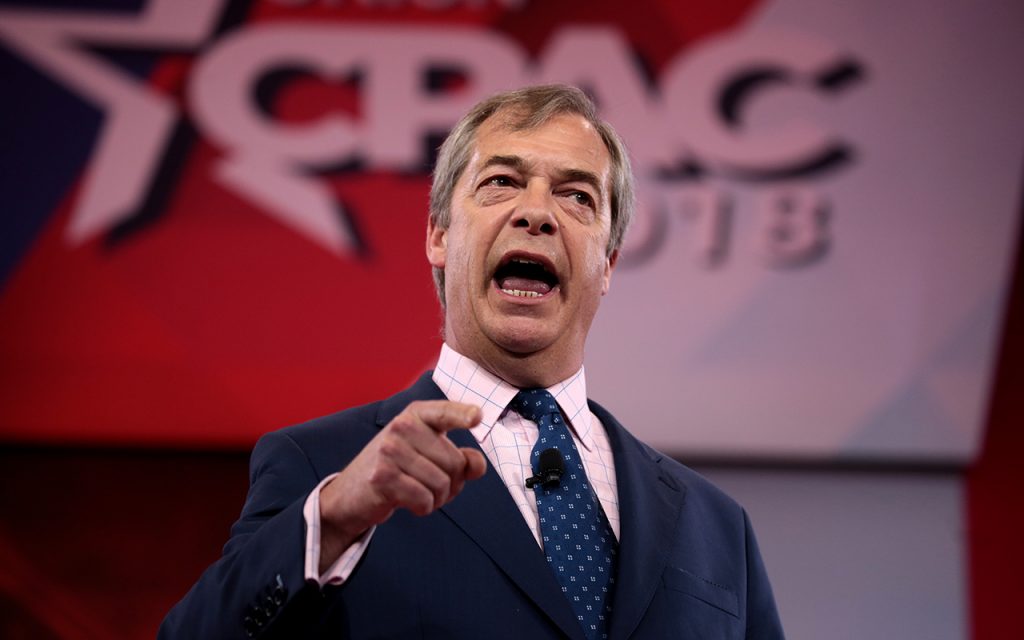 The serial electoral failure has once again taken aim at the British Royal Family in a series of remarks at the Conservative Political Action Conference (inspired by the American gathering of the same name) in Sydney, a right-wing event from which media were banned. I wonder why that would be?

Farage characterised the late Queen Mother as “a slightly overweight, chain-smoking gin drinker who lived to 101 years old” and claimed that Prince Harry’s popularity had “fallen off a cliff” since he became involved with, and subsequently married to, mixed-race actress Meghan Markle. He apparently also referred to the Duke of Sussex as “the Prince of Wokeness.”

“Here was Harry, here he was this young, brave, boisterous, all-male, getting into trouble, turning up at stag parties inappropriately dressed, drinking too much and causing all sorts of mayhem. And then he met Meghan Markle, and it’s fallen off a cliff.

We’ve been told in the last week that Meghan and Harry will only have two children… the population of the globe is exploding but no one dares talk about it… whether Prince Harry has two kids is irrelevant, given there are now 2.6 billion Chinese and Indians on this Earth.”

As well as expressing dismay at Prince Harry’s marriage to a mixed-race foreigner, Nigel Farage also suggested he preferred the prince back when he frequented parties dressed in Nazi uniform.

“Here was this young, brave, boisterous, all male, getting into trouble, turning up at stag parties inappropriately dressed, drinking too much and causing all sorts of mayhem.

And then, a brave British officer who did his bit in Afghanistan. He was the most popular royal of a younger generation that we’ve seen for 100 years.”

The former UKIP leader, now leader of the Brexit party which performed well in the recent European election in Britain, had kept a relatively low profile recently, having previously made numerous outspoken and racially inflammatory comments.

Farage has claimed in the past that he would be concerned if a group of Romanians lived near him, blamed immigrants for creating road congestion and called for people with the HIV virus to be banned from visiting Britain. Nigel Farage has recently doubled down, asserting that he didn’t regret the comments.

Oh Nigel. What a mistake-a to make-a! It’s considered very poor form to target the British Royals, and according to Royal commentator Robert Jobson, Farage’s comments were the “epitome of ignorance” and that Farage was “undoubtedly an ego-centric exhibitionist who seems to says what he thinks the audience he is addressing wants to hear.” So, like pretty much any politician. Anywhere. Ever. Fortunately, the Daily Express was on hand to restore some balance the debate.

Farage also claimed he wanted Prince William to “live forever” to prevent Harry from ascending the throne, displaying a spectacular lack of UK constitutional awareness. Harry is now about as close to the throne as I am – William’s children George, Charlotte and Louis are all now ahead of Harry when 93-year old Queen Elizabeth II eventually shuffles off this mortal coil, so Harry is only sixth in line. It ain’t going to happen. Farage can breathe easy.

Farage on royal family, a summary:

Obviously not the most egregious thing here but for a performative patriot Nigel Farage has a really poor grip on how the royal line of succession works https://t.co/R55f5MJRKp pic.twitter.com/QPyGDbs33P

Can someone explain this to me please? The Farage has gone abroad and insulted the royal family – a lot. His supporters are 'patriots' (bear with me) which by default means many are royalists? Anyone else see a slight puzzling contradiction here?

I see that Our Nige has been mouthing off Down Under about the British Royal Family and has reserved his most bilious spite for Prince Harry. I'm no monarchist, but I'd much rather have the prince as nominal figurehead for our country than a spittle-flecked gobshite like Farage. pic.twitter.com/NrWTeW2zSs

The question I am totally unable to fathom is how and why a serial failure like Farage is still deemed newsworthy? The man speaks only in populist soundbites with absolutely no tangible position on actual policies, and his electoral accomplishments are virtually non-existent.

He has stood for the UK parliament on seven occasions and has failed to be returned on seven occasions. In European parliament votes, he has fared better, sitting (or rather, not sitting but not attending yet collecting a sizeable salary and now pension from the organisation he purports to despise) for the south east of the UK since 1999.

Farage paints himself as a champion of the ‘common man’ yet hails from privilege – he had a stockbroker father and attended the private Dulwich College, before following in his father’s footsteps and working in the City.

This man is a total fraud, evidenced by the company he keeps. He’s big mates with right-wing narcissist Donald Trump and the equally ham-fisted and talentless Boris Johnson, who Farage has claimed may be willing to enter into some sort of electoral pact – a potential union which could allow Farage’s Brexit Party to take seats from Labour and in turn, the Brexit Party would leave the rest of the country to the Tories in a general election.

Once upon a time, I would have scoffed at people like Farage and his pathetic, small-minded and yes, racist, politics. But the result of the EU referendum, the ascent to the White House of Donald Trump, the seemingly unstoppable breakdown and disintegration of our sense of community and society as a whole has forced a re-think.

Stop the world. I want to get off.