The Grenfell Tower fire was both hideous and terrifying. There are no words to adequately convey the sense of horror and revulsion that something on this scale could happen. The speed with which the blaze took hold is truly bewildering, and although the reasons for this are presently unclear, recently applied exterior cladding has been implicated as a possible contributory factor in the rapid escalation. 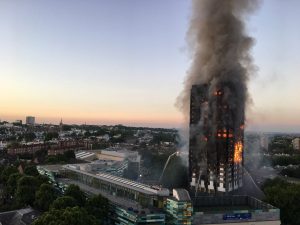 Current confirmed fatalities stand at 30. No one expects it to remain at that number. The figure will be pushing towards 100. 100 people burned alive in a recently, expensively refurbished tower block. Refurbished for cosmetic reasons? What other conclusion could be reached when the revamp left the building with no sprinklers, no active fire alarm.

Reports in The Times today suggest that for a mere £5,000 more in a renovation budget in the millions, fire-resistant cladding could have been used. It wasn’t. And people died. In a culture so wrapped up in health and safety red-tape, how could this possibly have happened?

As is usual, politicians headed to the scene. The Labour leader, Jeremy Corbyn, was praised for meeting with survivors of the tragedy, while the Prime Minister was widely criticised for ‘failing to show any humanity’ in not meeting with those affected, choosing instead to have a private tour with members of the emergency services. What kind of ‘leader’ behaves that way? Her immediate ordering of a public enquiry was the very least she could have done.

Details are continuing to emerge and the true horror of this horrendous event is becoming increasingly clear, and it is chilling. We can only hope that estimates of the human cost have been pitched way too high. The already confirmed total of 30 is 30 too many.