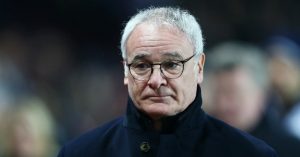 Leicester City last night called time on Claudio Ranieri’s reign at the club after less than two years in the post and a mere nine months after winning arguably the most unlikely Championship in English football history. It was certainly the most unlikely in the Premier League era, with Leicester narrowly escaping relegation in 2014-15 before strolling to the title last season with room to spare.

As Leicester’s struggles continued with a 2-1 defeat away to Sevilla in the Champions League on Wednesday, the club’s Thai owners finally blinked, dispensing with the services of the most successful manager in the club’s history.

A fortnight after the club offered Ranieri their “unwavering support”, Leicester vice-chairman Aiyawatt Srivaddhanaprabha said in a statement:

“This has been the most difficult decision we have had to make in nearly seven years since King Power took ownership of Leicester City.

“But we are duty-bound to put the Club’s long-term interests above all sense of personal sentiment, no matter how strong that might be.

“Claudio has brought outstanding qualities to his office. His skilful management, powers of motivation and measured approach have been reflective of the rich experience we always knew he would bring to Leicester City.

“His warmth, charm and charisma have helped transform perceptions of the club and develop its profile on a global scale. We will forever be grateful to him for what he has helped us to achieve.”

Reports this morning suggest that Ranieri had ‘lost’ the dressing room, and that relations with senior players had broken down, with the players complaining that the relationship between Ranieri, his coaches and the assistant manager Craig Shakespeare had broken down.

Despite being crowned Champions in May 2016 as 5000-1 outsiders, this season has been a disaster. The sale of N’Golo Kanté to Chelsea in the summer, together with contract uncertainty surrounding Player of the Year Riyad Mahrez, unsettled the club’s pre-season preparations, and as the season has progressed, the form of the players has fallen off a cliff.

The rock-solid partnership of captain Wes Morgan and Robert Huth has collapsed and Jamie Vardy can’t buy a goal – Leicester have failed to score in the League in 2017, and have collected only one point since the turn of the year.

High-profile former Leicester striker Gary Lineker was reduced to tears by the decision to remove Ranieri, suggesting the “game’s gone” in a social media post. In an interview on BBC  radio this morning, the Match of the Day presenter added:

“It’s a sign of modern football, what happened last season was truly extraordinary. The lack of gratitude from the owners of the club and who knows who else involved in such a decision beggars belief.

“That season will remain with us forever, it was truly special and a lot of that was down to the management.

“The same guy cannot be considered incapable of doing the job a few months months later after achieving what, for me, was the biggest miracle in sport.”

So where did it all go so wrong for Leicester? There is no doubt last season was little short of a sporting miracle – a team who had survived relegation the previous season by the skin of their teeth propelled to the title only 12 months later, having lost only three matches along the way.

Leicester were irresistible in 2015-16, a lesson in team spirit and the whole being far, far greater than the sum of its parts. The luck was with them and they barely put a foot wrong while other more realistic title contenders floundered at almost every turn.

The decision of the Leicester chairman to give each of his squad of Champions a new £100,000 BMW i8 certainly raised eyebrows, but did it turn the heads of the players? Did it send the message to the squad that they had made it to the big time, and it was time to kick back and enjoy their spoils?

It surely can’t have helped their focus, and losing their heartbeat Kanté to a big-money move to Chelsea destabilised their engine room. Ranieri moved to replace the Frenchman by bringing in Wilfred N’Didi from Belgian club Genk, but the 19-year old Nigerian only arrived in January by which time Leicester were already floundering.

What a sad indictment on the modern game that Ranieri should pay the price for his team’s failure to recapture their form and spirit of last season.

No right to win

By all measures, Leicester had no right to win the League – they were a lower- to mid-table side at best, but the ‘Tinkerman’ managed to wring every last drop of spirit, commitment, ability and desire from his squad to pull off an impossible title.

This kind of attitude from his players has so far been nowhere in evidence, and their performances have been abysmal, a far cry from the exhilarating displays which carried them to the title.

But money talks in football, and in removing Ranieri, the club’s Thai owners have shown their fear at the financial cost a relegation from the Premier League would bring. Suddenly, the £2m lavished on those BMWs doesn’t seem such a good idea.

The fickle finger of fate

It’s also telling that the three previous title-winning managers were no longer in their jobs soon after their title successes (Roberto Mancini at Manchester City, Sir Alex Ferguson at United and Jose Mourinho at Chelsea), although it should be said Ferguson retired. And perhaps there is some irony in the fact that Mancini is an early favourite to replace Ranieri at the King Power Stadium?

Claudio Ranieri can leave Leicester with his head held high. He achieved the impossible in claiming his first league title as a manager, he departs with Leicester still in the Champions League and with a very decent chance of making the next round and with time still to salvage their disastrous Premier League campaign.

But the owners have decided he isn’t the man to make it happen. Leicester fans can only hope Ranieri’s replacement will have the same impact the Italian did when he took over from Nigel Pearson in the summer of 2015. Otherwise, the procession following N’Golo Kanté will begin.