So the fireworks are spent, the champagne run dry and the headaches are kicking in. Happy new year everyone – welcome to 2017. Fresh hope, renewed opportunity and as-yet-undiscovered possibilities.

Or perhaps not. We are waking up this morning to the devastating news of a mass shooting in an Istanbul nightclub, bringing that hope, energy and positivity crashing back down to earth. At least 39 people have lost their lives in the opening moments of the new year, those families’ hopes and dreams crushed before they have even begun.

It’s not yet clear where lies the responsibility for this despicable attack, but the gunman is thought to have acted alone and is currently still at large.

Elsewhere, North Korea are proudly proclaiming that they are ‘close’ to testing long-range intercontinental ballistic missiles to counter the threat posed by, among other the United States. Kim Jong-Un boasted his country were a “nuclear and military power…. [which] would keep increasing the military capabilities for self-defence and pre-emptive striking capacity with a main emphasis on nuclear force,” according to the state news agency KCNA.

And speaking of the US, president-elect Donald Trump continues with his policy of sticking his fingers in his ears and shouting, “La la la – not listening!” over claims that Russia interfered in the recent US Presidential election through elaborate cyber-hacking.

“I think it’s unfair if we don’t know. It could be somebody else. I also know things that other people don’t know so we cannot be sure,” Trump said on Saturday, evoking memories of former US Defense Secretary Donald Rumsfeld’s baffling “Known Unknowns” ramble some years ago.

The CIA and the FBI seem pretty convinced of Russian involvement, but Trump is eager not to upset his soon-to-be ‘brother from another mother’ Vladimir Putin, and is doing all he can to gloss over these very serious allegations.

So very much a case of ‘Same old, same old’ as we look forward to the new year. The now tedious progress of Brexit will continue to dominate the news, and we can look forward to another year of meaningless platitudes from our politicians as they work tirelessly to feather their own nests, and those of their friends and donors, while thousands more become mired in poverty and destitution. 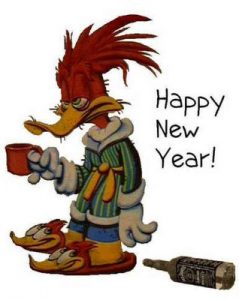