In so many ways, we are immune to the (daily) news of fresh atrocities in the civil war in Syria, many of which are claimed to have been perpetrated by the widely-reviled president, Bashar al-Assad. Assad has been in power since 2000, succeeding his father, Hafez al-Assad, who had ruled the country since 1971. 47 years of Assad rule – you might almost think it was a dictatorship.

Having won ‘elections’ in 2000 and 2007 with an unlikely share of the vote north of 97% in each, Assad was firmly entrenched as the Syrian leader by the time the civil war took hold in 2011. As US, EU and Canadian sanctions began to bite, Russia repeatedly vetoed UN draft resolutions for sanctions and possible military action in the country. Further electoral ‘success’ in 2014, in the first multi-party, ‘contested’ elections since a Ba’ath party coup, again saw Assad returned, but this time with only 88% of the vote. Business as usual. 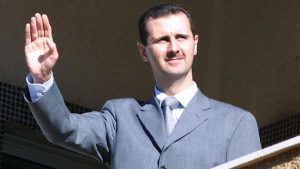 Events in the civil war have taken a more sinister turn in the past couple of years, with Assad accused by the West of having deployed chemical weapons against his own people in a bid to wrestle back control. The latest alleged atrocity, in Douma last week, has seen renewed international outrage, with volatile US president Donald Trump yesterday threatening air strikes against Syria, a move swiftly opposed by the Assad’s main ally – Russia.

Russia vows to shoot down any and all missiles fired at Syria. Get ready Russia, because they will be coming, nice and new and “smart!” You shouldn’t be partners with a Gas Killing Animal who kills his people and enjoys it!

Trump predictably dialled back his bellicose rhetoric, suggesting in a tweet today that he “never said when an attack on Syria would take place. Could be very soon or not so soon at all!” However, this came too late to stop the sycophantic British Prime Minister summoning her cabinet to discuss potential UK involvement in military action.

Prominent UK politicians have called for parliament to be involved in any decision of such magnitude, having previously  voted against UK military involvement back in 2013. Not least because of the fiasco surrounding the UK involvement in the Iraq invasion of 2003. We seemed to have learned our lesson. But now? Theresa May seems hell-bent of backing up Trump, a welcome distraction from the disaster which is Brexit, and an opportunity to remind the US of our ‘special relationship’ ahead of post-Brexit trade negotiations.

This time, however, there is a bigger issue at play – Russia. More specifically, the worsening relationship between Vladimir Putin and the West, driven by Trump’s erratic foreign policy on the one hand, and the UK/Russian tensions in the wake of the poisoning of double agent Sergei Skripal, and the UK’s insistence that the Russian state was responsible for a chemical attack on UK soil.

Russian diplomats have been expelled from countries all over the world, and Moscow had responded in kind. Cold War tensions are resurfacing rapidly, and Vladimir Putin has recently flexed Russian military muscles by unveiling newly-developed, ‘unstoppable’ nuclear missiles.

“They have not succeeded in holding Russia back,” Putin said, referring to the West. “Now they need to take account of a new reality and understand that everything I have said today is not a bluff.” 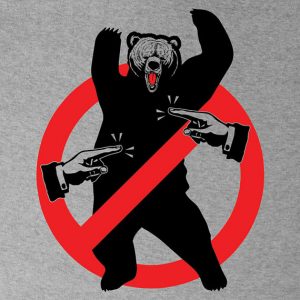 Clearly, as ferocious supporters of Assad, any Western military action in Syria would seriously risk poking the Russian bear. Add into the mix the highly provocative trade war with China which Trump is ramping up, along with the US/North Korea instability, and we are faced with a huge melting pot of political -and, by extension, military – tension rapidly coming to the boil.

On a more localised level, rising right-wing support in Europe and the UK (and indeed the US, following the unlikely election of Donald Trump on an isolationist ticket), Brexit at risk of triggering a wider collapse of the EU and a rising tide of anti-Semitic feeling and activity forewarns of an increasing instability in the wider world, and not merely the Middle East and Europe.

We now stand with a number of high-profile demagogues wielding power – Trump in America, Putin in Russia, Assad in Syria and Xi Jinping in China, where the incumbent president has recently ripped up the constitution to allow himself to remain in power for as long as he likes. Can this end well? I’m not so sure.

We are in turbulent and unstable times, with global tensions not seen since the middle of the 20th century. A new Cold War is brewing, and this time, with the Russians and the Chinese entwined, the spectre is much more clearly defined. With an mentally unstable US president, and a European Union on the ropes following the UK’s decision to significantly weaken it, there is emerging a huge power vacuum in world affairs – Putin and Xi are well-placed to step in.

Whether that’s a good or a bad thing remains to be seen. But can anyone see Trump going down without a fight? And in this case, it might be literal rather than purely political. That should scare us all.