His was the very definition of ‘a life well-lived’. The apparent suicide of Anthony Bourdain in a French hotel was shocking and tragic in equal measure.

“As you move through this life and this world, you change things slightly. You leave marks behind, however small. And in return, life… leaves marks on you. Most of the time, those marks – on your body or on your heart – are beautiful. Often, though, they hurt.”

From drug-abusing party animal on the New York restaurant scene of the 1990s to his more recent incarnation as an acclaimed writer and food-and-travel documentary maker, Bourdain has seen – and done – it all. 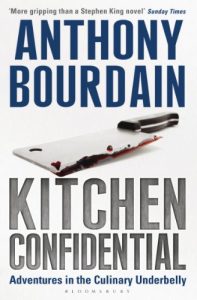 Bourdain spent many years as a line cook and sous chef in New York before becoming the executive chef at (the now-defunct) Les Halles brasserie in Manhattan. It was during his time at Les Halles that he found fame – perhaps notoriety would be more appropriate? – with the release of Kitchen Confidential: Adventures in the Culinary Underbelly, his memoir on life as a professional chef and the experiences and people he had met along the way. In the book, he wrote candidly – and with no little humour – about his abuse of drugs, including cocaine, heroin and LSD.

The success of the book – translated into more than two dozen languages – brought Bourdain into the public consciousness and kick-started his TV career. A Cook’s Tour took Bourdain around the world, visiting exotic locations and learning the local cuisines and customs as he went.

No Reservations followed a similar pattern, and for the past few years, Bourdain worked on Parts Unknown, a variation on the well-worn theme but where he showcased more obscure countries and cities.

Life of a culinary ‘rock star’

Anthony Bourdain wore his heart on his sleeve and could be considered something of a ‘bad boy’ of the culinary world. He wasn’t afraid to call out the culture of the celebrity chef, the overt commercialism of the US culinary scene and its lack of culinary authenticity.

The irony of this was not lost in him, but he chose to use his fame as a force for change: he advocated the value of traditional or “peasant” foods, including nose-to-tail use of all parts of the animal in cooking. He also championed the quality of freshly prepared street food compared with fast food chains.

Bourdain championed industrious Spanish-speaking immigrants in the catering industry, considering them talented chefs and invaluable cooks, underpaid and unrecognised even though they have become the backbone of the US restaurant industry.

“In these current circumstances, one must pick a side,” Bourdain wrote on Medium in December 2017. “I stand unhesitatingly and unwaveringly with the women. Not out of virtue, or integrity, or high moral outrage  –  as much as I’d like to say so  –  but because late in life, I met one extraordinary woman with a particularly awful story to tell, who introduced me to other extraordinary women with equally awful stories.”

Such a public show of strength and support – so recently – is, on the face of it, incongruent with his decision to take his own life. Having battled the demons of his early career drug addiction, Bourdain transitioned into a hugely successful media career and has represented a force for change and recognition of those suffering and undervalued.

But perhaps the #MeToo movement has re-opened old wounds and released old demons with which Bourdain himself could not cope? Who knows? As he noted in the same Medium article:

“To the extent which my work in Kitchen Confidential celebrated or prolonged a culture that allowed the kind of grotesque behaviours we’re hearing about all too frequently is something I think about daily, with real remorse.”

Suicide on the rise

Suicide is a growing issue worldwide, and in the US in particular. Recent figures released by the US Centres for Disease Control and Prevention show a 30% increase in almost half of states since 1999.

“Suicide is just one of the three leading causes of death that are on the rise. And these statistics don’t begin to reveal the emotional, social and financial toll that suicide exacts on individuals, families and communities that are left devastated.”

We can only contemplate the way his experiences affected Anthony Bourdain. Despite showing no outward signs of depression, his scars must have been chronically deep and conflicting for him to kill himself. There is no doubt he will be sorely missed.

“Low plastic stool, cheap but delicious noodles, cold Hanoi beer.” This is how I’ll remember Tony. He taught us about food — but more importantly, about its ability to bring us together. To make us a little less afraid of the unknown. We’ll miss him. pic.twitter.com/orEXIaEMZM

His legacy is one of breaking down barriers, seeking new experiences and embracing and sharing what he found as he travelled the world in search of culinary knowledge and wisdom. High-profile suicides – such as Bourdain’s and that of fashion designer Kate Spade earlier this week – get people talking.

Let’s hope these people are as much discussed in death as they were in life, and people wake up to the need to talk about mental health issues.

The last word – thick with irony – on this tragic situation should probably come from Bourdain himself:

“There is no final resting place of the mind.”

Where to get help:

From Canada or US: If you’re in an emergency, please call 911

Please feel free to add your thoughts in the comments section below, or visit our Facebook and Twitter pages. Also, send this page to your friends and family if you think they would be interested. Thanks for stopping by.