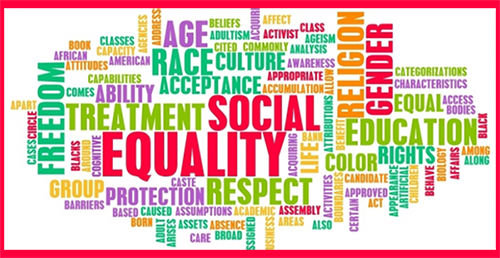 ‘Plus ça change, plus c’est la même chose’ as the saying goes – the more things change, the more they stay the same. In the 21st century, a time when we think that we, as a society, are enlightened, tolerant and forward-thinking, all evidence appears to be to the contrary.

The glass ceiling still exists in most industries and professions, with gender (and, in fact, racial) equality still, in reality, a distant pipe dream. This has been clearly evidenced by such gut-churning episodes as the ongoing pay scandal at the BBC, while the #MeToo movement has laid bare the disgraceful misogyny and predilection for sexual abuse among the high-profile men (and it is mostly men- such as Harvey Weinstein and Kevin Spacey) in positions of power, who see themselves as untouchable because of their power and, in many cases, their celebrity.

When the president of the United States admits to being a sexual predator and still gets elected, we know we have got problems.

Closer to home, the shameful culture of sexism, female objectification and entitlement has found itself in the glaring spotlight of publicity at the recent President’s Club private dinner – a ‘charity’ event held at London’s Dorchester Hotel, where rich men felt enabled to treat female waiting staff with utter contempt and many saw fit to proposition the staff while wives and families remained blissfully unaware at home.

The latest dirty laundry being aired over the Oxfam in Haiti scandal is further proof that authoritative and influential men still hold all the cards and dictate all the terms in their interactions with women, particularly those women who find themselves in positions of weakness and helplessness where there is no real alternative but to bend to the wishes of their domineering overlords.

Are we really be surprised?

This sort of behaviour has been the norm since the dawn of time, yet we have worked hard to give the appearance that such activities are a thing of the past, idiosyncrasies of a bygone, Carry On-style era, where sexual abuse was tolerated, accepted even, as little more than a bit of harmless fun, workplace banter with no ill-intent. How wrong we are, and how little we have moved forward.

Let’s take this a little further. Back in September 2017, a female sex doll named ‘Samantha’ was on display at an electronics festival. It was touted as being one of the most realistic ever. Perhaps too realistic – the doll was so severely molested by a group of. men it had to be removed from display and sent away for repair, so badly damaged and “soiled” was she.

What kind of human being would inflict this treatment on a sex doll, a life-like representation of a real woman? Are we to be relieved that it was abuse only of a toy, an outlet for male sexual aggression where there is no real harm done?

Are those men who buy and use the ‘Frigid Farah’ doll safer in the real world because they can act out their rape fantasies on a piece of plastic? When the company behind the ‘Farah’ doll, True Companion, claim on their website that their robots “allow everyone to realise their most private sexual dreams”, what message is this sending out to these frustrated, emasculated men, who already feel inadequate and marginalised? What happens when violating and abusing a robot is no longer enough to quench their deepest desires?

Perhaps the opening line of this piece is not entirely accurate. ‘The more things change, the worse they become’ would be a more fitting description of the times we live in. Far from moving forward and improving life for half of the world’s population, we are just making it unimaginably worse, normalising what was previously seen as morally and socially reprehensible.

But was it really? The current climate speaks to a situation where these sort of behaviours and attitudes have always existed, lurking in the murky depths of men’s minds throughout a politically-correct era during which they dare not share their fantasies and desires. The now-easy availability of pornography of all tastes and descriptions through a few clicks in a web browser has freed previously suppressed taboos.

Get back to your own country!

Progress on other social attitudes has also been turned on its head – the swell of anti-immigration feeling, popularised by the election of Donald Trump and the decision of the UK to pull up the drawbridge by voting to leave the European Union, suggests that racism and xenophobia have never been conquered and has merely been dormant, festering underground while the world is busy congratulating itself on its supposed openness, tolerance and inclusivity.

The election of a black president in the United States was meant to symbolise the last nail in the coffin of racism, yet Barack Obama has barely been gone from office for a year and his successor is falling over himself to undo all the good work achieved in the previous eight years, while simultaneously building a wall to stop foreigners from entering America and trying to send ‘home’ refugees from “shithole countries.”

So far from making progress, we are actually regressing at an alarming rate. Misogyny, racism and intolerance are fast-becoming the rule rather than the exception. Just as the internet has brought pornography into our homes at the click of a button, so the ability to post comments, blogs and memes which are at best incendiary – and at worst overtly racist, misogynistic or homophobic – allows people harbouring such deep-seated prejudices a voice and a platform not previously available.

Why do people feel the need to act in this way, under the cover of a keyboard and an avatar? What is it that we, that men, are so afraid of?